A Message from the Dolphins 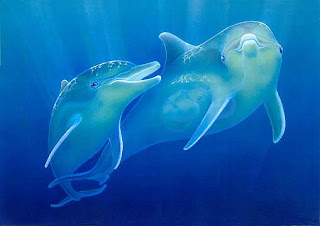 A few years ago I was privileged to be able to speak to 26 Dolphins that had beached their selves on a Flordia beach on the Gulf Coast.
picking up my e-mail when I saw the announcement on one of my e-mail lists. to their selves.


Some thing told me that they needed to be heard, and I wanted to see just why they would do such a disastrous thing
I started by calling them in ,and I was led by my Higher Being to call them Angles. I did not know why this happened, but it did . I started the conversation with them by asking why they would beach them selves ?
I got a very clear reply that they were trying to make humans aware that what they were doing to the oceans was killing all humanity ,and they needed to stop immediately or there would be disasters, and consequence beyond anybody’s control.
I then asked just what they were talking about and if they could be specific?
I got an answer that was very disturbing to me and should be to you also. I was told then that They could not take all the big banging noises that were being created in their home and it was killing them and other marine life.
They spoke to me about the blasting that was happening under water and how it would be the death of all of us if it was not stopped now.
I thanked them for the information and wished them well and then I closed.
After that I found out the reason I was led to call them
Angles. It was the fact that almost all of them had been destroyed because they did not have a place to keep them safe, and help them heal.
I found out later that they were blasting in the Gulf for oil.
Need I say more?
It is time to start listening to nature because according to Chief Seattle
“ The Earth does not belong to us We belong to the Earth”
by: Rebecca DiNolfi ©
Posted by My Lady Rebecca at 8:28 AM