A Tribute To Fairies 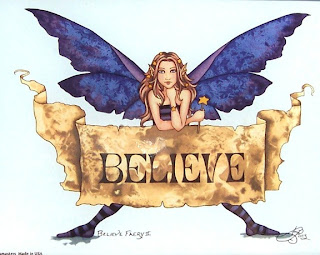 (Fae's Musings)
Faeries are secretive and shy creatures having withdrawn into their private and ancient realm. Distrustful of the modern; they are a hard lot to get to know. They think it amusing to cast their fairy dust on the unsuspecting. Keys not found, one earring lost, sock missing, your spectacles misplaced; all of these might possibly be concealed by the tiny folk; and might just as readily be returned to you but for the asking. It is most rewarding to favor and think kindly on the fae. Many of us can never expect to visit enchanted liregularly with them but with a peaceful and restful place set aside to welcome them into your home, they can be a comforting and wonderful presence in a hectic and busy world. Sometimes¼..some of them ¼ will share their lives.
If you choose to provide shelter for the fae, you will be amply rewarded for your kindness to them, for the world today does not often honor their olde world ways and quite often they are shunned as mere pretend. The faeries will never forget your kind thoughts and gestures. They will stay and stay and grow strong from it. But be warned that just as readily, your cruel and thoughtless actions will shorten their life span and the inevitable struggle for a living thing to hang on to its precious life is a terrible ordeal that will be visited upon you. When humans speak of fairy mischief and spells, it is often the result of our own unkind behavior. Remedies do exist to banish the truly bothersome spells of the faeries. Even in the most kind and loving of homes, the fae won't settle permanently in any one place, but come and go just as the winds move. It is their very nature to do so. The change of seasons, the scent of a flower, the song of a bird, croaking of frogs, the crack of thunder, might all possibly send them to “otherworlds” known only to them. But with an ambient and glowing home provided; fairys have been known to linger long in the company of their human companions, sometimes a lifetime. A dreamy little faery house, safe and warm with many views, is utterly irresistible to the faery... 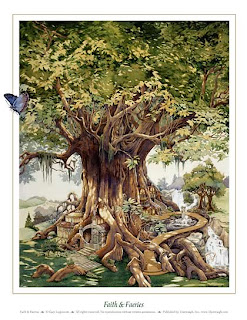 ¼ to stop and linger a bit.
Locate the house in a sheltered place, on your deck or terrace, or in the home, if it's the indoor sort you wish to cultivate. Court their favor with milk chocolates, berries and spices. But, understand your gifts will not disappear ¼fore faeries will extract the spirit essence of a thing and leave the outer shell behind. What you will see are the treasures from their lives brought into their little fae houses.
Ferns and wildflowers covered with dew for drinking and strengthening their magic. Traces of pixie dust all about and their cherished animal companions and keepsakes. Rarely...if ever...will you see them, but they are there. They are drawn to humans and both adore and fear us. We are not always kind to the things that they love. Faeries of the garden are drawn to toads and frogs, dragonflies and bugs. They are each other’s companions. Flowers and herbs, thyme, foxglove, bluebells and fern, all assist them in moving between the Land of Fairy and the human world. The three‑leaf clover is especially cherished by Fae.... but not the four! It is said that to keep a four‑leaf clover yourself, will give you the faery sight, as will the sipping of calendula tea.

Four times a year faeries become restless and often move about; even if for a brief time, before returning. The ancient pagan fire festivals of Imbolc (February 2), Beltane (May 1), Lugnassad (August 2), and Samhain (October 31) are these days. It goes without saying that to have your fae friends little house ready and welcoming for them after their rigorous travels will bring great joy to your own home as you offer a safe place to visit.
Midsummer eve at twilight, when the moon is full, is the very best time to come under the enchantment required for seeing faeries. Some say that a wash of marigold water rubbed on the eyelids will help to have the fairy sight.
A peek into their dreamy "otherworld" is all we can have. For humans to visit the Realm of Faery is said to be lost forever, never to come back. But to share with them the best of ourselves is to bring their magic into our own lives. Experience the peek into a dreamy "otherworld". 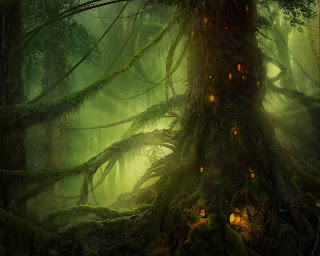 Unknown‑‑"Faeries are the perfect example of human failing....that humans insist on believing in things that are not real."
W.B. Yeats‑‑"Come faeries, take me out of this dull world, for I would ride with you upon the wind and dance upon the mountains like a flame."
P.G. Wodehouse‑‑"She's one of those soppy girls, riddled from head to foot with whimsy. She holds the view that the stars are God's daisy chain, that rabbits are gnomes in attendance on the Fairy Queen, and that every time a fairy blows its wee nose a baby is born, which, as we know, is not the case. She's a drooper."
Ida Rentoul Outhwaite‑‑"The wall is silence, the grass is sleep, / Tall trees of peace their vigil keep, / And the Fairy of Dreams with moth‑wings furled. / Plays soft on her flute to the drowsy world."
Homer (Iliad, B. xxiv. 617.)‑‑"Where round the bed, whence Achelous springs, That wat'ry Fairies dance in mazy rings."
Dan Fogelberg‑‑"Between the worlds of men and make believe I can be found."
The Voyage of the Bassett‑‑"More magical than I had dreamed, and more varied. Some are as small as flowers, some as tall as I, and all sizes between but all seem to exist as a celebration of nature's enchantment. " 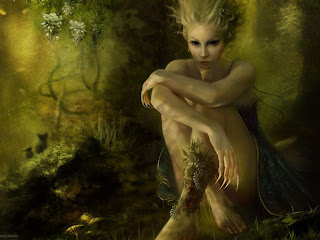 J.R.R. Tolkein‑‑"Faerie is a perilous land, and in it are pitfalls for the unwary, and dungeons for the overbold."
Unknown‑‑And as the season come and go, here's something you might like to know ... there are fairies everywhere under bushes, in the air, playing games just like you play, singing through their busy day. So listen, touch, and look around ‑‑ in the air and on the ground. And if you watch all nature's things, you might just see a fairy's wing."
Unknown‑‑"The Faeries went from the world, dear, because men's hearts grow cold, and only the eyes of the children see what is hidden from the old and only the magic of love, dear, can ever turn the key that unlocks the gates of Fae and set the Sidhe free."
Tori Amos‑‑"I think that people who can't believe in faeries aren't worth knowing. I just think that alternate realities make you a good writer. If your work is any more than one dimension, you believe in faeries."
Unknown‑‑"Have you ever thought that you had seen something moving very quickly just outside of your field of vision? Have you ever smelled a faint scent of flowers or perfume and know that there were none around? Have you ever felt like someone or something was playing in your hair (or pulling it) when you were alone?"
Tinkerbell‑‑"A sprinkling of Fairy dust will get you where you want to go."
Unknown‑‑"The Realm of Fairy is a strange shadow land, lying just beyond the fields we know."
Mark Twain (Interview in Seattle Star, Nov. 30, 1905, p. 8)‑‑"The longing of my heart is a fairy portrait of myself: I want to be pretty; I want to eliminate facts and fill up the gap with charms."
Eleanor Roosevelt‑‑"I think, at a child's birth, if a mother could ask a fairy godmother to endow it with the most useful gift, that gift would be curiosity."
Tori Amos‑‑"We are all fairies living underneath a leaf of a lily pad."
Unknown‑‑"Each fairy breath of summer, as it blows with loveliness, inspires the blushing rose."
William Collins‑‑"By fairy hands their knell is rung; / By forms unseen their dirge is sung."
Hans Christian Anderson‑‑"Life itself is the most wonderful fairy tale."
Polly McGuire‑‑"Stories are like fairy gold, the more you give away, the more you have."
Unknown‑‑"The rustle of the wind reminds us a Fairy is near."
John Milton (Paradise Regained, Bk ii. 359)‑‑"Fairy damsels met in forest wide / By knights of Logres, or of Lyones, / Lancelot or Pelleas, or Pellenore."
John Milton (Paradise Lost, Bk i. 781)‑‑"Fairy elves, / Whose midnight revels, by a forest side / Or fountain, some belated peasant sees, / Or dreams he sees, while overhead the moon / Sits arbitress."

The thirteenth fairy,
her fingers as long and thin as straws,
her eyes burnt by cigarettes,
her uterus an empty teacup,
arrived with an evil gift.
Anne Sexton ‑ Briar Rose (Sleeping Beauty)
Romeo. I dreamt a dream tonight.
Mercutio. And so did I.
Romeo. Well, what was yours?
Mercutio. That dreamers often lie.
Romeo. In bed asleep, while they do dream things true.
Mercutio. O then I see Queen Mab hath been with you.
She is the fairies’ midwife, and she comes
In shape no bigger than an agate stone
On the forefinger of an alderman,
Drawn with a team of little atomi
Over men’s noses as they lie asleep.
William Shakespeare (1564–1616), British dramatist, poet. Romeo and Mercutio, in Romeo and Juliet.
A lady with whom I was riding in the forest said to me that the woods always seemed to her to wait, as if the genii who inhabit them suspend their deeds until the wayfarer had passed onward; a thought which poetry has celebrated in the dance of the fairies, which breaks off on the approach of human feet.
Ralph Waldo Emerson
And we fairies, that do run
By the triple Hecate’s team
From the presence of the sun,
Following darkness like a dream,
Now are frolic. Not a mouse
Shall disturb this hallowed house.
William Shakespeare (A Midsummers Night's Dream)
God defend me from that Welsh fairy,
Lest he transform me to a piece of cheese!
William Shakespeare (The Merry Wives of Windsor)
This is a POEM
Summer Wind:
It is a sultry day; the sun has drunk
The dew that lay upon the morning grass;
There is no rustling in the lofty elm¼
¼ All is silent, save the faint
And interrupted murmur of the bee,
Settling on the sick flowers¼.
¼ Why so slow?
Gentle and voluble spirit of the air?
‑‑‑V. Bryant
Come fairies
take me out of this dull world,
for I would ride with you
upon the wind and dance
upon the mountains like a flame.
W.B. Yeats. 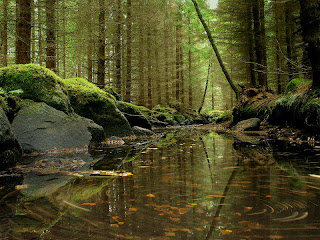 Another POEM
Oh, Where Do The Fairies Hide?
Oh, where do fairies hide their heads
When snow lies on the hills,
When frost has spoiled their mossy beds,
And crystallized their rills?
Beneath the moon they can not trip
In circles o'er the plain;
And draughts of dew they cannot sip,
Till green leaves come again.
Perhaps in small blue diving bells,
They plunge beneath the waves,
Inhabiting the twisted shells
That lie in coral caves.
Perhaps in red Vesuvius,
Carousals they maintain;
And cheer their drooping spirits thus,
Till green leaves come again.
When they return there will be mirth,
And music in the air,
And fairy wings upon the earth,
And mischief everywhere.
The maids, to keep the elves aloof,
Will bar the doors in vain;
No keyhole will be fairy proof,
When green leaves come again.
Posted by My Lady Rebecca at 6:37 AM

Email ThisBlogThis!Share to TwitterShare to FacebookShare to Pinterest
Labels: What I believe