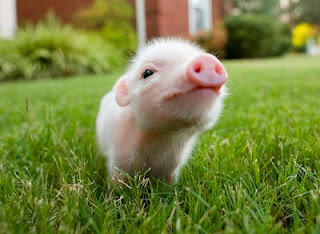 It is not  at all surprising  to me that this trend, or craze for the new fantasy pig  has so many people in the companion pig community up in arms. The new pig on the block is really a wonderful idea but unfortunately it falls way short of  the claims to be only 20 to 35 lbs. when full grown. Not only is this a fantasy, but it is also very dangerous for these pigs that the breeders are trying to keep too small .  This can and  does cause a big problem of  a much shorter life span and malnutrition for these poor potbellied pigs. Yes you read right I said Potbellied pigs. These new highly advertized fad type pigs are, and always were and always will be potbellied pigs. This is where the problem starts.
It is quite apparent that nobody except the tight knit Potbellied pig community knows this well hidden fact. I had a law professor tell me that the ordinance that passed for a less than 40 lb Mini pig  in Midland  MI was just for Mini pigs not potbellied pigs. This is my point  we need to put on a campaign to tell the truth about  what these designer type pigs really are. THEY ARE POTBELLIED PIGS .. Nothing more nothing less and all Potbellied Pigs can and do  get to be 150 + lbs or more.
These designer tea cup etc. pigs are flooding the nation and are within 1 year of becoming another animal needing to be re homed because of this well publicized  fallacy. The article that I just read was amazing and the pigs in the pictures that are said  to be the adults are only about 6 to 7 months old if that . If these pigs are their breeders, then they will be very small . You can tell their approximate ages by the length of their tales. All Pigs grow until they are 3 to 4 years old and are not considered adults until that time. So the adults in this article are still babies having babies. Of course the babies will be tiny. Tiny baby pigs have tiny baby pigs. Pigs can reproduce at 6 months of age. That does not make them adults by any means.
It  has already become a problem for the rescue community and now it is becoming a problem for zoning. Although I am finding in most cases the breeders of this so called tea cup pig etc. don't even ask for proof that it is legal  to have one of their pigs in the municipality they are sending it to. They just take the money and that is it. they also do not take the pig back if it does not meet the promised weight and size that they advertize. Here is an example of one of these breeders and their tea cup pigs..http://pixiepigs.com/in_the_media_12.html
I hope you get the picture we, meaning the Potbellied Pig community are dumped on with too many potbellied pigs already from this travisty.  The laws that we are forced to pass because of these fantasy pigs are going to be for pigs that are under the average weight of the potbellied pig making a problem for the pigs that are already in the area where  the new law was passed. I know, you will say that the ones that were there already would be grandfathered in. Don't be so sure. Not all communities  recognize the grandfather clause, or there is no grandfather clause. I have had this happen before. Then what happens? Do they kick all the other  potbellied pigs out because they are too large for the law and when the tea cup pig gets the size it should be will it have to go too.?  Go Where? There is no room at the INN so to speak..
So I hope I made my point , there is no breed called Tea Cup, Micro Mini, Etc. They all are Potbellied pigs so buyer beware. Do your home work. Don't believe the breeder that is making thousands on the stories they are pedaling to the unsuspecting pig buyers. Check out potbellied pig sites and look at the true size of these pigs. They do make wonderful companions, but only for a few that are able to handle their high intelligence and strong pig headed personality.
In my opinion it takes a special person to handle a perpetual toddler running around the house with a snoot for snooting and rooting. So If after you have read this article and hopefully many more like it and you still want a potbellied as a companion pet please contact a local sanctuary or our Pig Placement Network: http://pigplacementnetwork.com   , to give a displaced pig that has lost their home a chance to have a good life. I am here to help change any law that does not include the potbellied pig as a pet so you will not have to be fearful of loosing someone you have grown to love very much . Pigs Really do leave Hoof Prints on your Heart if you allow them to. So buyer beware.
By Rebecca DiNolfi  ©
, Zoning Consultant
www.petpigzone.com
Posted by My Lady Rebecca at 6:15 AM