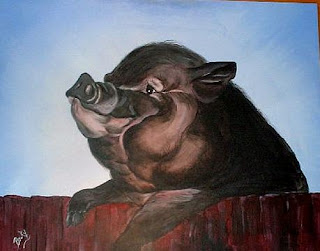 Reggie Was Some Pig!

Reggie was some pig, in her short life she accomplished more than most people I have known. Because of her short time on this Earthly plane there are many other Potbellied pigs that are still able to enjoy the companionship of their families, and friends. They can still curl up in their blankies, and get belly rubs safe in their homes where they belong.

She is the dear soul directly responsible for me, Becky DiNolfi becoming involved so deeply in the zoning cases for the companion pig.

All because I never wanted anyone to take my piggy girls away from me, I have become one of the main activists in the world for the right to have a potbellied pig as a companion animal. The fight to keep Potbellied pigs and other miniature pigs as companion animals in the home still goes on every day somewhere in this country. A country who claims we are free... 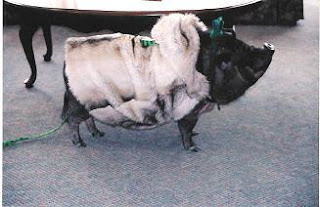 Well Reggie and I are here now to tell you, we are not free to have a potbellied pig as a companion in most places in this country so the fight goes on. More cases are coming in as I write this dedication to my special little girl.

Reggie was the bigger than life advocate for the pet Potbellied pig as a companion animal and therapy pet partner. She did countless hours of community service, and therapy work. She was up front, and present in many zoning cases. She was the good will ambassador for all pigs, and their families.

She brought smiles to many sad faces. She helped many children, and adults alike have something special to talk about. She was able to turn the tables on the myth that pigs are dirty and stinky animals that only deserve to be served with mashed potatoes and gravy.

She was happy, and proud to be who she was, and do what she did. When she went out in public she always had to have her swine finery on. Something pretty around her neck or a special hat to adorn her little round Yoda head.

She had many honors given to her. 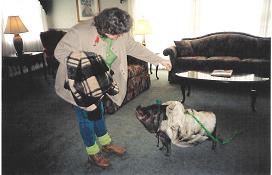 In May 1997 she was honored to be picked by Life Magazine as one of their Heroes in their special Hero Edition. She was there as big as life itself right along with Abe Lincoln, and Mother Teresa, John Wayne, and Colon Powell. My Reggie girl made it to the big time.

That year she got Honorable Mention from the Delta Society for her services as a therapy pet partner. She was also honored by Tommy Tomlinson, Representative of Pennsylvania. She went on to meet the Mayer of Philadelphia, Pennsylvania, our Gov now.

Gov. Edward G Rendell whom we have kept in touch with all these many years later. He has kept the picture we gave him of the 3 of us in his office ever since we visited him in 1996. 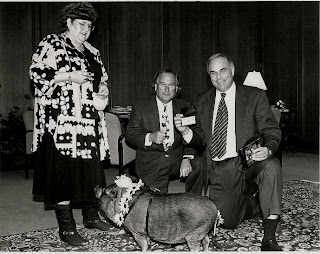 She walked up and back down 67 steps in Philadelphia's City Hall to appear at the City council meeting to protest potbellied pigs not being allowed in the city of Philadelphia, Pa. We never did win that case these many years later.

Chanel 17 TV came out in the hall to interview us because we were not allowed in the council chambers.

She went along to appear at the Court house of Shelton CT for another zoning protest, and was kicked out of the court house when she tried to slip inside unnoticed.

She appeared on Americas Greatest Pets as well as all the different TV stations in the Philadelphia area doing pet therapy.

The Tokyo Broadcasting Co from Tokyo Japan came to our home, and filmed us for 2 days doing pet therapy at one of her nursing homes in the Levittown Pa. area.
Our Picture is also hanging in the Pennsylvania Art Museum in Harrisburg Pa. for the 50th Anniversary celebration of Levittown, Pa.

She has had many Random Act of Kindness awards issued to her by the Tri County Potbellied Pig Club.

Reggie and her sister Pepper have been attuned to the Master Level of Reiki for healing purposes. Anyone that touched Reggie or Pepper were instantly given Reiki healing. She was a Reiki Master.

She gave many hours of education to children and adults alike in schools, and libraries in Pennsylvania. She was able to teach them just how intelligent a pig really is. She learned her flash cards with gusto She knew how to spell. She knew her colors, she could do simple math. She knew the answers to all the problems. and I never once taught her an answer. I would ask her to spell mom and she would spell Becky. Reggie and I proved that animals could read minds. I would ask someone to pick a color card and not tell the color. She picked the right one every time.

She earned thousands of dollars for charities by doing Kiss-A-Pig contests for schools, and businesses.

She was the driving force for reading programs in local schools. Whichever class read the most books could get to pick the teacher that would kiss the pig, and that was Reggie.

Every where we went, weather it was to a park, or a flea Market, or just a walk around the camp ground where we stayed for 6 seasons, Reggie and Pepper were always giving therapy to all the people they met on the way.

They educated so many about the pros and cons of having a potbellied pig as a companion animal.

Reggie has left a legacy unsurpassed by any human that I have ever known or would ever hope to know in my life time.

She has given love, and healing every where she has gone, and to everyone she has touched.

She has taken me on one of the most amazing journeys of my life. As my dear friend Scott just said to me, "She was my Dragon, and I was her rider." 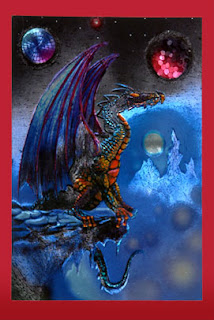