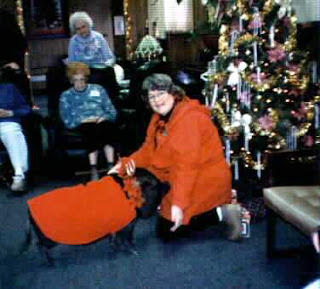 Nelson is not alone in her realization that the love between animals and their guardians applies to far more species than what many people would classify as “traditional” pets. Rebecca DiNolfi of Madison Township, PA, and her potbellied pig, Funny Farms Reggie, proved that fact to numerous individuals who needed a little kindness and compassion. Though this remarkable animal—who was often simply called Reggie for short—passed away in 2007, her caretaker will never forget how she changed numerous lives for the better.
“Reggie was my constant companion and guardian . . . after I had suffered three major heart attacks in 1991 and 1992 and was unable to function as a normal human being,” notes DiNolfi. “I brought Reggie home when she was only seven weeks old, and . . . was able to go off almost all my heart medications within six weeks . . . because I was able to forget about myself and concentrate on her.” Despite her having no prior experience with pigs, it didn’t take long for DiNolfi to recognize the positive impact that Reggie could have on other people, as well.
The pair ultimately became certified to perform animal-assisted therapy in nursing homes, orphanages, adult day care centers, hospitals, and special-needs schools. In 1997, LIFE magazine even honored Reggie as one of seven pet heroes for her work throughout the Delaware Valley. Eventually, DiNolfi also developed her career as the world’s leading zoning consultant for companion potbellied pigs.
“Because our pets are pigs, they are not allowed to be in a lot of municipalities as pets,” she explains. “So we fight every day to change the laws that were put on the books forbidding us to have them in our homes.” DiNolfi currently shares her residence with two other pigs—Pepper and Little Willow White Feather—but emphasizes that Reggie left a legacy unrivaled by most humans she has known. Whether a companion animal achieves this level of acclaim, fills a house with humor, or instills a sense of responsibility in young caretakers, he is a source and a recipient of love. To that end, his whiskers, scales, or snout are far less significant than his heart.

Chloe’s Garden—Reggie
ChloesGarden.com/Reggie.htm
Posted by My Lady Rebecca at 10:53 AM